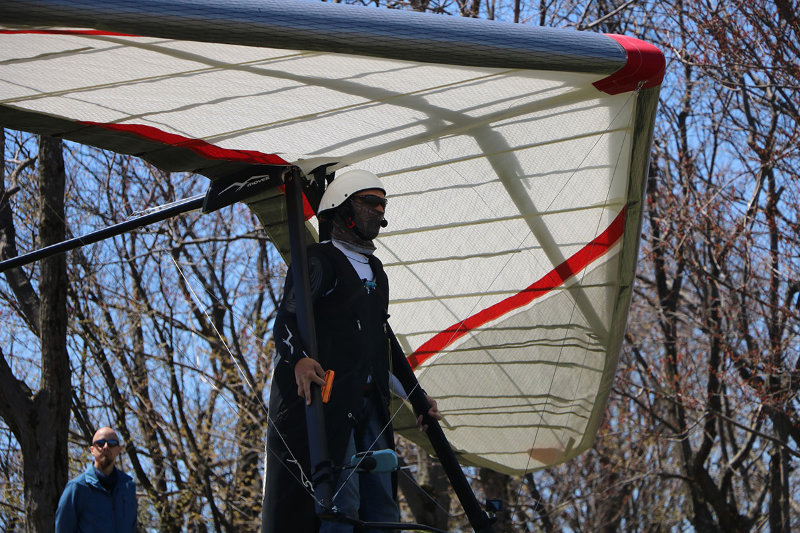 A day at home: by Philippe Michaud

When I got up that morning, I had no specific plans for the day. There was a slight breeze from the south and no clouds. A fresh squeezed lemon water and a coffee later, I decided to go for a bicycle ride. I swung by the club, and as I was entering the dirt road that led to it, I stumbled upon the shuttle that was going up to launch. As soon as I saw the hungry XC pilots aboard, I knew I was late. I immediately turned around and raced back home to get my gear, and caught the next ride up. In the meantime, I was fortunate enough to arrange for a retrieve (thanks Roger!) and I was trying to prepare mentally.

One paraglider pilot had poked fun at me a week prior: "your problem is that you don't like to fly". It resonated with me and got me thinking. He was right: I was usually fast like a bullet, racing through the sky, but I wasn't staying airborne long enough to achieve bigger flights. I had slowly realized that over the last couple of years, and it was one of the reasons why I had just recently switched from a Wills wing T2C144 to Moyes Litespeed RX5: that glider just won't come down.

Also, my godfather (who like my father has been in hang gliding for more than 40 years) and I had been talking about it, and I even though I had dreamt for so long to break Quebec’s and Yamaska’s 30 year old HG record, all I wanted and needed in the end is to make the most out of the day, and to enjoy the moment: to take it all in, and fly the conditions.

My two previous flights that week had been a roller coaster. Both 100k+, flying for hours in challenging conditions, making low saves, and staying focused. It was good training. On both occasions I almost took unnecessary risks. First, by crossing a 30km forest while low, and secondly by crossing the very wide St Lawrence river both low, and late into the day. On both occasions I was reasonable and landed to fly another day. And on the third flight that week, it paid off in spades.

Once we reached the south launch, I got ready in a hurry: all the top guns had already left, and it was past 12h30.

As soon as I was high enough I went on glide. Some cumulus clouds were forming in the distance, and I wanted to catch up. But surprisingly enough, even though there was about 25km of wind, the thermals were igniting on the Lee side of the clouds which made things tricky. Soon enough, I got low. I eventually climbed out with broken and scattered lift, just focusing on staying up. I was turning in all the lift I could find. Before I knew it, and because the drift was so strong, I was already a hundred kilometers out.

By then, the conditions had not gotten any better. I was low and it was almost four. Relentless, I did end up finding decent lift and drifted with it, to finally get up to 1800m. Shivers ran across my spine as the paragliders which I thought I was chasing joined me in that climb. It gave me a second life. As I reached cloudbase, I could not wait for them and went on glide. On all previous attempts in that direction, the following segment always had me landing: there, the wind had a tendency to pick up and break lift apart. 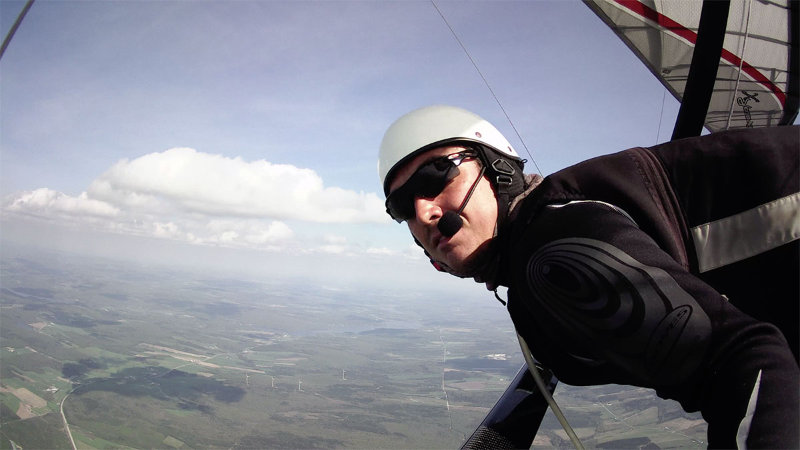 I found myself low again and in the shade. Miraculously, I found weak lift in which I thought I should drift. Surprisingly enough, and a whole valley later, I was up to 2000m. I thought to myself, surely, this is final glide: I'm going to make it, I'm going to cross that one river that had been out of my reach still, and finally break the record.

It was pure bliss. I couldn't believe it. I was ecstatic.

But it wasn't over! The sun pierced the clouds over the river and I was climbing once again just outside of controlled airspace, drifting towards it. I was fortunate enough (and thanks to xctrack) to be able to maneuver around it. To my stupefaction I was once again at 2000m. I then went cross wind, on a glide north, hoping to stay near decent landings.

It was half past six, and I finally landed just outside Saint Lazare de Bellechasse, past Québec City. I had flown 217km in 5 hours and 40 minutes.

Going long here is not easy. We start low in the valley, where the air is hot and stable, and as we progress on the plateau to the east, conditions usually get better and cloudbase is higher. But there, endless forest, lakes, and shifting winds often make it quite challenging (not to mention the effect of the St Lawrence and the Appalachians range on the weather). There are no straight lines here, and you may feel like you’re flying in different countries with different weather all in one flight. Where I landed, farmers are 2-3 weeks behind the ones where I took off from (and they still had frost at night!). The two paraglider pilots I flew with that day have been trying to break 200km for years, and both had their turn holding the PG record at around 180km. They managed 140km that day. The next day, conditions looked amazing again, and I was back at it. I landed in Frampton, just past the 200km mark, 15km away from where I ended up the day before.

It's not the Alps, it's not the Rockies, it’s not Brazil or Australia, but it’s home. And there’s no place like home. 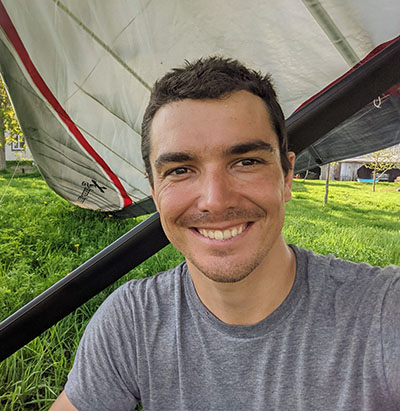