It was late afternoon when Henry and me were coming to the launch site of 'El Cuchillo' ('The knife'). The wind from NE was coming spot on with 20 km/h to the cliff of a volcanic crater just 100 m high. We rigged our gliders expecting a soaring flight right before Christmas eve of 2007. So I just brought what was needed: my IQ Sonic as an acoustic vario attached to my helmet and my old analog camera with just six pictures left. 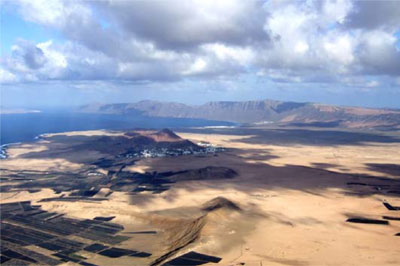 At 3 pm I launched, soared up and enjoyed the laminar sea breeze. Beautiful cu's were beginning to form right over the north shore of Lanzarote 5 km in front of me. I could catch a good thermal and immediately I found myself at cloud base at 1.000 m. With a strong northerly I was already drifting into the inside of the island and right into the most spectacular scenery - the Timanfaya National Park. Actually just roads can make this volcanic landscape accessible; or cloud streets! 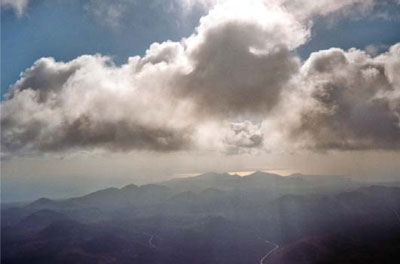 The sky was clear and I had a brilliant view over the Atlantic ocean and further down wind to the next Canarian island of Fuerteventura. All of a sudden I began to realize that my intention of an inter-island flight and the first crossing of the channel between Lanzarote and Fuerteventura with a hang glider could be possible today. With a helping tail wind I started to undertake this adventure immediately. But first like at every XC flight I had to get over some tricky parts before reaching the last thermal for my final glide; but this time over 15 km sea water! 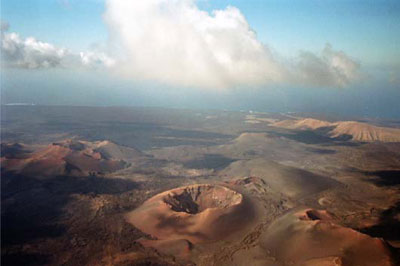 After leaving all behind l found myself alone over big volcanos and black lava fields. It is also my first time taking this route right over the 'badlands'. But the thermals were good like always over unlandable areas. After one hour flying directly over this lunar landscape I reached the other end of the island and finally an inhabited area again. It was time for a decision – landing or going on? On top of that I did not have any instruments giving me precisely any numbers to count on. What was left then was the feeling in my belly and the experience of many challenging final glides when flying competitions. Beside the right day it also takes some certain criteria to bring with. The willingness to experiment and 100 % trust in your glider are just two of them. 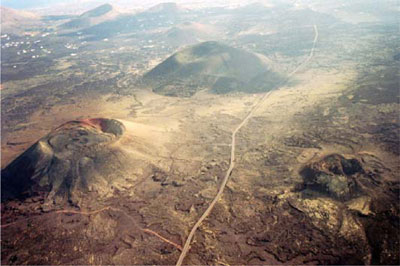 At 600 m and over the last peak south of Lanzarote I could catch my all decisive last thermal. During my turns I had plenty of time to make up my mind. Meanwhile I was drifting to the sea and I was just 5 km before the end of the coastline. The next beach from now on would be 20 km away at the island of Fuerteventura. In between the sea channel of 'La Bocayna'. The adventure is not over yet, it is just beginning!

At cloud base at again 1.000 m I put myself on the edge of the cloud and kept on thermalling to gain as much altitude as possible. With every turn facing Fuerteventura I tried to take stock of my position for a successful final glide there. My second option for getting short - if there was any at all - was the little island 'Lobos' which is just a bit offshore of Fuerteventura and directly on course. I decided to go now on a direct final glide. 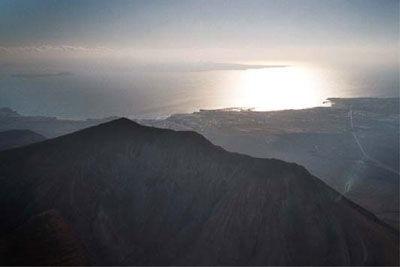 With full VG and best glide I first had to fly over the last coastal areas south of Lanzarote. Over Playa Blanca I overflew the port and the last shore line of the island. It was a stunning view and a overwhelming feeling gliding over the big water especially when crossing the borderline between land and sea! Actually the real flight was just going to happen and like totally focused I was heading on to a deep blue Atlantic Ocean.

With about 30 km/h tailwind my glide turned into a joyride even knowing that there was no way back. There were plenty of whitecaps on the water surface showing me a good breeze. Two sailing boats made also their way thru the channel of Bocayna. I could even see their high bow waves. This definite wind indicator would also help significantly to increase my glide rate when getting low. 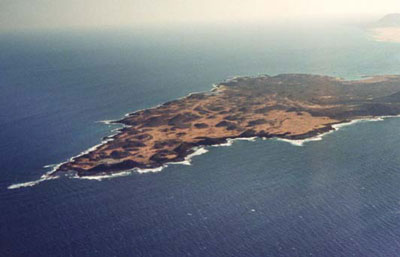 After ten minutes I have already completed half the way of the 15 km wide channel and I still reckoned my altitude at about 500 m. The glide since then has been totally fascinating and I was absolutely sure that my RS4 is going to make it to the beach of Corralejo. As an European alpine pilot it was quite unusual just being surrounded by water. Even stranger was the fact that I started this flight from a little ridge just 100 m high. It has immediately taken my practical experience as a hang glider pilot to a new dimension.

In some seconds I was overflying the small island of Lobos still high at about 300 m. Right after Lobos I reached the shallow costal waters of Fuerteventura. In the bright turquoise seawater I could see my shadows on the coral reef and suddenly my wings were not alone anymore. Plenty of kite surfers in all kind of colours were playing in the waves underneath me. In the very next moment I was overshooting the beach of Corralejo and Fuerteventura! 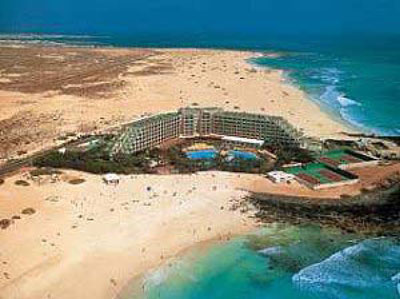 The whole flight was flowing smoothly and was now going to end as fast as it started. Still 200m high I kept on gliding down wind till I reached the significant Riu Palace Hotel Resort. The noble, green hotel entrance should be the perfect place to derig my carbon glider. Right over the Hotel I finally turned into the wind to go down the hotel beach which was flanked left and right with deck chairs. I just had to wait till my feet touched softly the sandy ground. Hotel guests in light beach wear watched me landing with amazed faces and opened mouths. A woman came up to me smilingly asking from which star I come from? I smiled back and pointed my finger out to the sea... 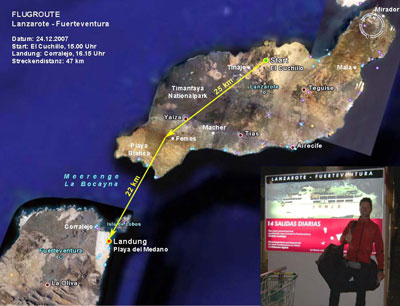