Once again it was time for one of the best competitions in the world - Brasilia 2009.  The combination of friendly but competitive Brazilian pilots, great geography, good weather conditions, and an awesome final glide to the best goal paddock in the world, make this competition incredibly great fun. 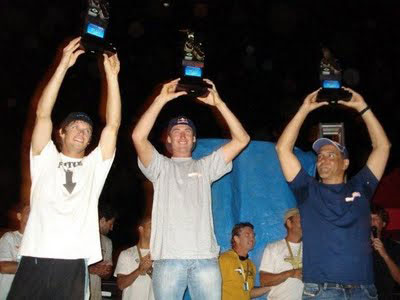 The usually extremely consistent weather was marred with some unseasonal wind and rain, but a total of four solid tasks were still possible.  It was only the last three days in which tasks were not possible.  Each of the four tasks were completed in 2-3 hours, landing back at the esplanade in the centre of Brasilia each time.  Goal offers you pizza, beer, massages, pretty girls and many tales of wins and woes.  After all the eating, drinking, rubbing, looking and lies are finished, it's only five minutes back to the Motel.  Fantastic!

At the end of the competition Jonny Durand Jnr (AUS & World #1) won by a total of 21 points from Dustin Martin.  This was Jonny's first win at a competition in Brazil since he started competing here nine years ago.  Congratulations to Jonny for a great effort.

The first Brazilian pilot was Pedro Matos in a triumphant return to hang gliding after a seven year break, and flying a brand new Moyes Litespeed RS4 with all carbon options.  An extremely impressive result.

There were a total of eleven Moyes gliders in the top twenty.  Well done to all pilots.

For full details about the competition, go to the official website at http://superrace2009.blogspot.com.

To view some photos of this fantastic flying area, please visit http://www.flickr.com/photos/timmerfotos.