Micheldorf, as the learning and training place of Manfred Ruhmer, was again after three years one of our weekend competitions. Flying Features: A small launch lane in the forest up on a low hill side, moderate thermals just in spring / autumn time and a first low ride over the woods before reaching the higher peaks of the east Alps. 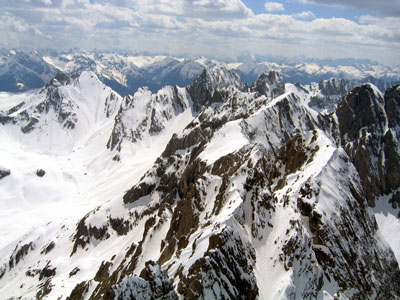 After the first task of 50 km in overcast conditions the field was still pretty close together by points. A 150 km FAI-triangle was called the next day as an all-decisive 2nd Task. But the task committee pushed it too hard and just one pilot made goal – Thomas Wiesinger, a local pilot and a good XC-buddy on a LS4. Thomas also won the meet followed by the other local pilots Raimund Kaiser (Laminar Zero9) and Andreas Aichinger (LS5).

It was not a lucky accident that our Nationals were held at Greifenburg, place of the European Championships in June 2008. 75 pilots took the opportunity to come and train with us – and what a training it was! 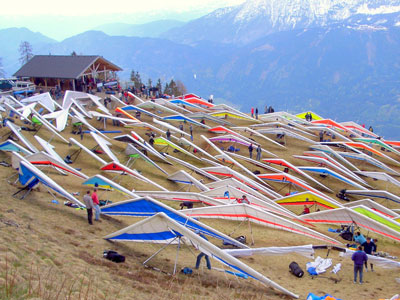 Three tasks of 106 / 139 / 80 km and each day magnificant changes in the scorring! Michi Friesenbichler could win the first two tasks with then an overall lead of 400 points. Actually it all should have been safe and sound that Michi is going to win the meet but like it has been proven too many times before: everything is possible!

At the last third task it came up to the final showdown. And even just a 80 km Jojo can change a lot! After 60 km the leading gaggle was already heading to the last turnpoint 20 km before goal. There was Michi, Günther Tschurnig, Johann Sulzbacher and me looking for the last thermal. At 1.800 MSL we were already in the valley wind. Johann as the lowest of us was the first catching a thermal. Due to shadowing and east valley winds the climb was broken but half the turn good with 3m/s. I decided to stay while the other two, Michi and Günther, kept going.

Johann and me climbed till a final glide rate of 1:10 due to head wind into goal. Before that we made the last Buoy 5 km out in the middle of the valley, turned 180° and started our final.

I tried to look for the other two gliders but due to a hot final with Johann, a pilot of 65 years, I had to concentrate on that story. While racing and coming closer to goal I did not see any glider in front. So I tried even harder to win this task and after another 10 minutes it happened to come true.

After l landed one glider after the other was coming in but neither Michi nor Günther. About 30 gliders made goal. While mostly everybody had already derigged their gliders suddenly Michi appeared over goal making wing overs. His report was that Günther and him were getting low like almost going to land. With some light thermals they tried to stay airborne scratching trees and house roofs in the valley while floating with the wind away from goal. At the very end of the valley they could soar up again and glide back home.

Finally to all our surprise our 65 years old Johann Sulzbacher and Senior European Champion got our 'new' National Champion 2008 on his LS4 followed by Michi (LS3.5) and me (RS4)! 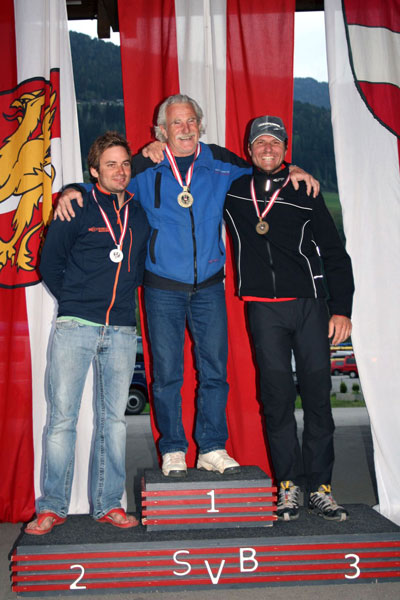 Different place but same thing – one weekend and two tasks. 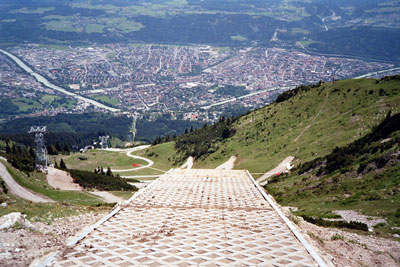 This time we are in Innsbruck and about 50 pilots meet at the goal field in Gnadenwald. With the cable car we go up to the Seegrube at 1.900 MSL. The gliders follow by truck. There is still a lot of snow at the Haferle Kar, a steep gap over launch, and as a skiing nation some pilots decide to go skiing with rented skis before they go flying. 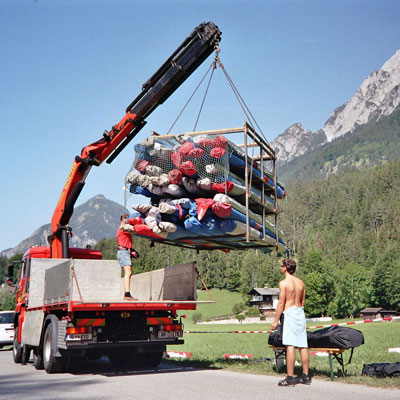 It is a tricky day with light south winds, stable air masses with overdevelopment and a low cloud base. The task of 75 km is a Jojo of four turnpoints along the ridge. Some parts in sunshine but most parts in shadows. With a cloud base at 2.700 MSL you just stay next to the peaks of the 'Karwendel'. On one side the vertical, alpine ridge and on the other side the stunning few to the City of Innsbruck. The thermals are broken with short glides but already after 30 km I am with Carl Walbank in the lead gliding high out to the 2nd turnpoint. 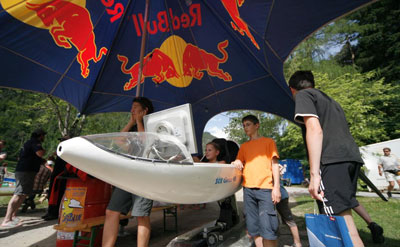 After a long glide to a shadowed turnpoint we just can make it back to fly close over launch. While Carl and others try to find lift there I keep going. A good thermal brings me back to cloud base and I just start enjoying my lead when suddenly Robert Reisinger cruises into the picture! My moment of joy did not last too long and Robert is just 100 m underneath me – this means trouble now ;-) ! The next 20 km he gets closer and closer and after the last thermal he is suddenly 10 m under my left wing.

We start our 22 km final glide, both on our RS4, and like flying as a duet we turn around the 3rd Buoy. While I fly back to the ridge to get some good air Robert stays further to the valley on course. Some lift brings me back higher than him and we both start to race.

10 km out I see rainfall right over goal which makes the whole thing not even easier! Due to better air or a brand new glider my fast glide is better than Robert's.

5 km before goal I hit the rain first but I can keep racing while Robert has to slow down. With 120 km/h speed I fly over the landing field to the last turnpoint just 1 km out, wing over and into goal. A nice show for all these spectators in goal. Robert follows after some seconds, third Walter Mayer (LS4.5) followed by Carl Walbank (RS3.5).

At the 2nd day sunshine and Cu's are filling the sky. A beautiful last task of 120 km out and return can be finished by many pilots. This time I have to share my final glide with Walter Mayer who takes some risk and starts to glide 30 km out of goal. 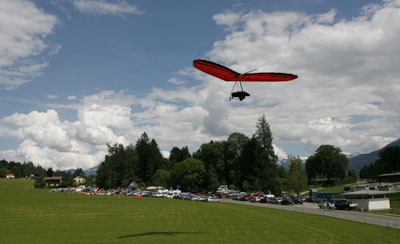 Due to tactical reasons I don't take so much risk but to make sure winning this meet. 25 km before goal I decide to thermal again to increase my needed glide ratio to 1:12. I see Walter 3 km to the north going on his final with a needed ratio of 1:16. Beeing 200 m higher than him but 1 km behind I start to glide with 90 km/h to catch up. While Walter has to fly around these big flat peaks on course I can go straight over them due to a higher altitude. Slowly I come closer to his keel and 10 km before goal I am 200 m behind him. We both keep racing right next to the ridge and 5 km out I am now just 100 m behind but as high as Walter. Then I see his glider getting good air in front and bringing him higher than me. That is it, I cannot overtake him anymore and three minutes later we race over the goal line.

After these remarkable training comps I guess at the upcoming European Championships 2008 the Litespeed models will have some say too...