He was flown to Sydney by helicopter on the same day. His family and friends arrived from Queensland and New Zealand to be by his side at his time of passing. Steve has been an integral part of the Moyes factory for the past 5 years, we will miss him. We are all so very sorry for this loss.

Steve's funeral was on Friday 9th January, some of his friends were not able to attend. Bruce Wynne wrote to tell his mates about the day. 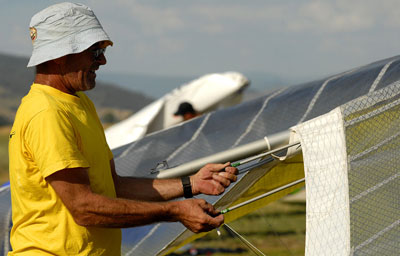 The proceedings started at 10 am at the Yarra Bay sailing club in Sydney which is the same bay where we dune fly sometimes. All Steve's immediate family with partners and kids were there from NZ and Qld.

People in the Forbes comp had come by plane that morning. Some like Attila drove from goal at Coonamble which was a 260 km task from Forbes the day before. Some people drove up from Corryong. Many Canungra pilots flew down. Corinna flew in from Germany.

Some wore suits, some wore thongs, all in honour of our good mate. The wind was on and a sole pilot, wearing his tie, flew the dunes in tribute to Steve. It was visible from the sailing club and a nice moment. Others walked on the beach and wrote "Steve" in the sand.

The service was at 2:15 for 45 mins. Some walked from the sailing club. The chapel was packed, many standing and overflowing out the door. I think Steve's mum was surprised. His glider sail was laid in front of the coffin.

Family members spoke about Steve's life. His 15 year old niece Jesse wrote and read a touching poem "The Day I Lost You". That was a tough one. Ken Harford (kiwi mate), Bill Moyes, Bruce Wynne, Paul Amess and Peter Smart all said a few words. Paul left him a maggot shirt and a smoke. Dave Seib put together a slide show and it was shown during the service. Music was Pink Floyd "Learning to Fly" and Bette Middler "Wind beneath my wings". There weren't too many dry eyes after that.

Then back to the sailing club. Many stayed until their flights were due back at the airport and others wandered off. We had an open house and BBQ for the immediate family that evening and they went off to the hotel about 11 pm.

It was a good send off for our mate.