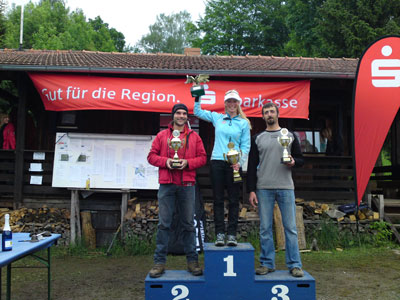 The weather forecast for the German Open at Hochries/Samerberg was marginal. It was a surprise for us when the organizers asked the pilots to set up under an overcast sky because they expected a short flyable window of some hours. Nevertheless, we were positive and hoped for the best - and flew a small and difficult 55 km task along the northern ridge of the Bavarian alps, before it started raining again.

Only three pilots made goal on that day, I had landed after 40 kms out of respect for the big dark clouds developing in the mountains. At the women´s worlds, I had learnt to stay motivated even if the weather is not promising for a big task- but then I really like the small, difficult flights that might take a long time without covering a lot of ground.

After another cancelled day, we went up the mountain to try again. Cloud base was low, just above take off, the lift would be light and the next rain was just a few hours away. They set a task out into the flatlands and back to Wessner Hof as a goal, very close to Wolfi Genghammer´s Skyline headquarter. 51 very difficult kilometers.

Lucky that my glider has such a good easy handling, I really appreciate that in light conditions. I can feel every little surge of thermal even before the vario tells me. And I needed that more than ever, as the climbs were slow and far apart and not easy to find. And then the glide - from about 15 kms out I went on final glide! At headquarter the guys followed my flight as I had a life tracking device with me: http://livexc.dhv1.de/live_show_track.php?trackID=1363&2d=1

Only two of us flex class pilots made goal on that day, and I was one of them!

When the next day was cancelled, I could not believe the result - I was the best German pilot and won our national championship! This is the first time a woman managed to win the German nationals in hang gliding history. Thanks for the great Moyes Litespeed 3.5 s and all the support that got me there!

More news about the next European competitions on my blog: corinnaflies.blogspot.com.