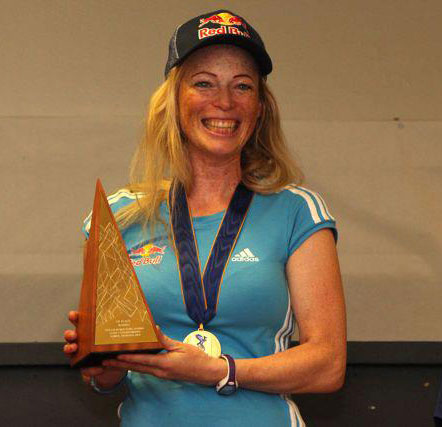 I’m an active member of two hang gliding clubs: Bremen (North) and Darmstadt (Central), and I go to meetings and fly with the local pilots for fun or XC or competitions.

I also attend the meetings of our hang gliding association and I write for the DHV magazine (6 editions per year), featured with 1 article in almost every magazine.

My main sponsors are Red Bull and Adidas and I do a lot of media work for newspapers, magazines, radio and TV, so I am well known amongst the hang gliding and paragliding community.

I’m active on social media and I have a regular blog at http://corinnaflies.blogspot.com.au/

Pilots ask me about flying techniques, but also about tuning gliders and finding the right equipment because I’m too light a pilot to do that well in the sport.

As a flight attendant, I learn about different cultures and I like to learn languages. I speak German, English, Spanish, Portuguese, Italian and French.

I don’t just fly comps, but I also support the Junior and Ladies hang gliding challenge, held in Austria for German speaking pilots of Germany, Switzerland, and Austria every year. From Munich I drive to the mountains to fly if I don’t have to work or if at a competition.

E This email address is being protected from spambots. You need JavaScript enabled to view it.