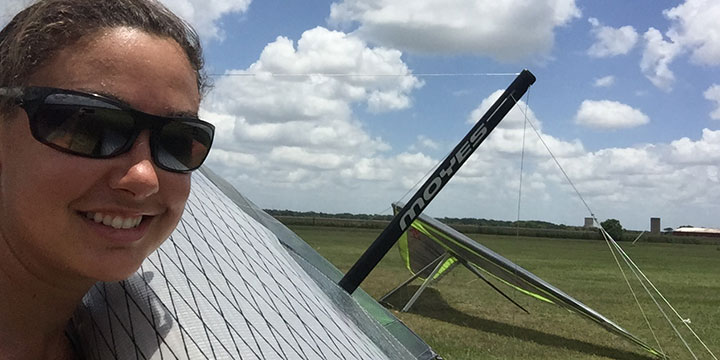 12 July 2016 - Wharton, Texas. The morning skies promised another long day, another chance to claim the Gecko challenge. I had been trying repeatedly to get the 188 km task done and also break my personal record of 111 km, but each attempt ended half way or even less. I never let it get me down, but I was very eager to claim the challenge! Today was the day I would finally go the distance. 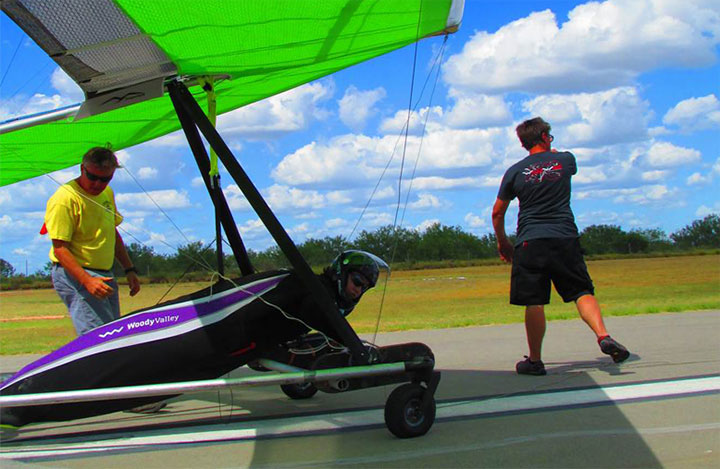 Cloud streets had formed early in the morning and continued to develop and rise as the Texan sun baked the land. The forecast predicted good 15 mph southerly winds all the way up and at a comfortable heading that would neither push me into Houston or College Station airspace. As I waited outside the Cowboy Up hangar for Bart and Tiki to arrive at 1300, I gazed at the sky and watched the clouds cycle through their life. I set a waypoint 244 km out which would provide good guidance, but also act as a dangling carrot to get to. 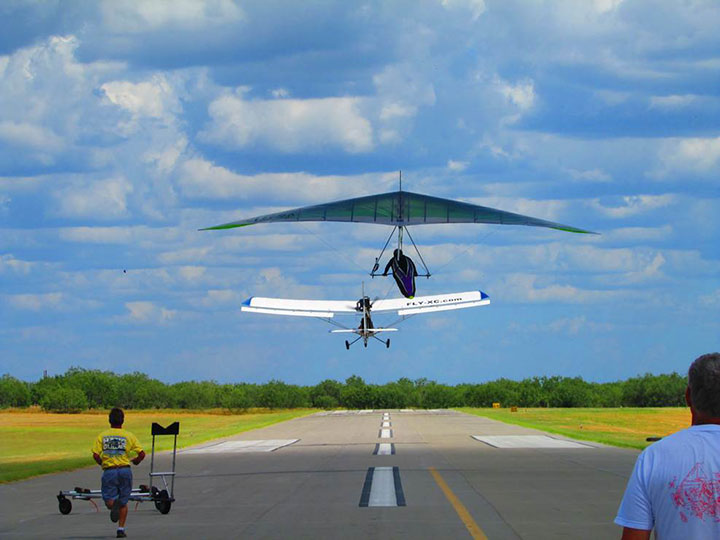 I launched at 1340 and got off from a very rowdy tow expecting to turn and zoom straight up, but the lift was not there. My best option was to pull VG and drive upwind to find lift, but after burning precious altitude over shaded ground I decided to relight. 1406 - Take two and nearly the same thing! My friend called me on the radio to tell me he decked it only a few fields downwind. Just as I was getting concerned, I found my XC ticket. A solid 400 fpm climb took me to 4,000 feet and the sky ahead was looking great! By the time I topped out my climb I was well out of glide to the airport. I was on my way to knock out the Gecko challenge! 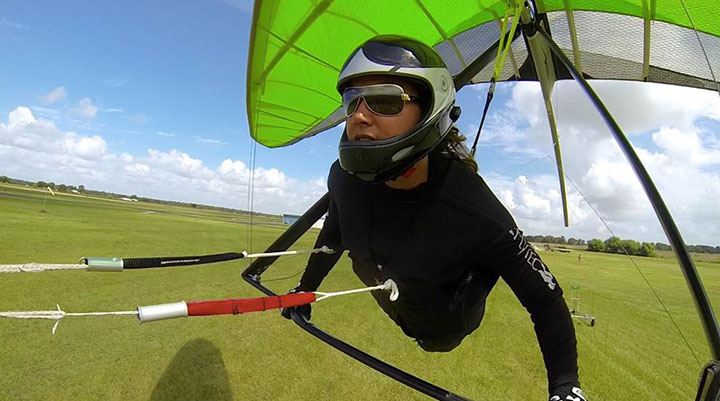 It was tough and slow-going at first. I went on a decent glide to the next good cloud and lost nearly half of my altitude along the way. I flew through beeps but struggled to find the solid climb like the one I just left. My friend called me on the radio to tell me he raced to the ground hunting for the good stuff and recommended to hang on to whatever I could find. I did a quick search under the cloud and realized he was right. 50-100 fpm was the best that would keep me aloft for nearly 20 minutes as I drifted along. 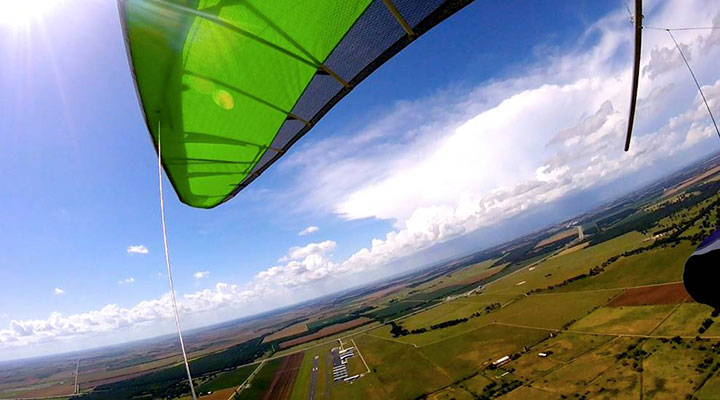 The cloud was dying and I had been looking everywhere for my next climb. Behind me was not promising, the cloud to my west was far and too risky to get to, east was blue, and the clouds ahead looked like I was going to miss the lift train up. I chose to charge ahead but with a watchful eye on the blue. Sinking rapidly and now down to 1000 feet, I could feel a thermal close by. Now in ground-trigger mode, I glanced down at the earth and found a beautiful thermal rolling through the tall silky grass. Sure enough, the thermal was feeding a brand new wispy forming in the blue. 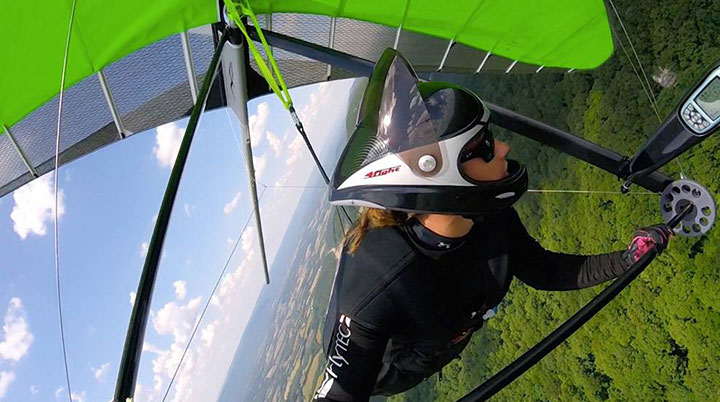 Topping out my lift in a pleasant 400 fpm climb, the sky ahead allowed me to relax for a few minutes. With that being said, I was not on a bee-line to goal. I had to cross streets on multiple occasions, go backwards just to stay up, and even hang on to lighter lift as I noticed the day was cycling. The Gecko did very well getting me to where I needed to go and usually with more altitude than I would expect. Most climbs were averaging 400 fpm and sometimes I would find 600. 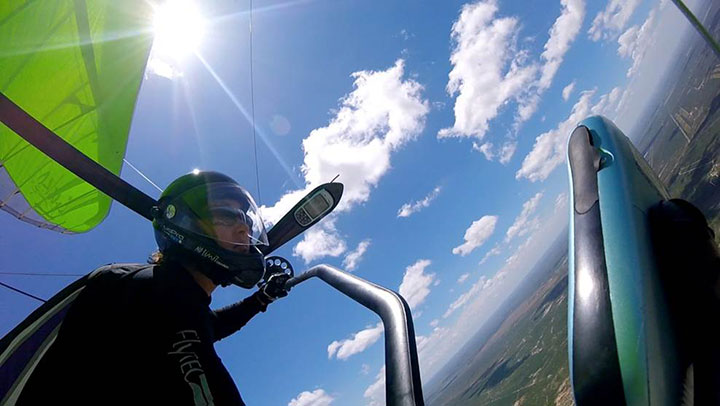 When I finally reached College Station I had so many emotions running through my head. I was very happy to break my personal record of 69 miles, very close to flying my first 100 mile flight, and the Gecko challenge was waiting for me on the horizon. Just as I had a little happy dance in my harness, it started to get slow again. Windspeed dropped, climbs were slow again and the sky was drying out. I had been in the air for nearly four hours and could see the sky’s energy winding down for a beautiful sunset. Blue holes were expanding as the sea breeze chased me and I still had about 50 km to go. I was so close yet still so far away. 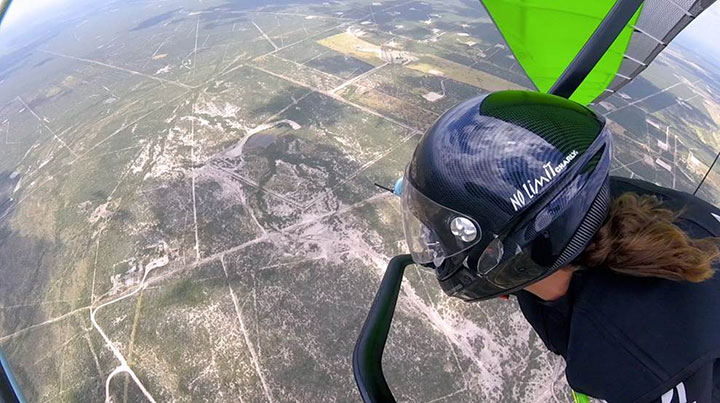 Getting a little nervous as I was losing altitude and at about 2500 feet, I focused on three options for lift. The landfill was my first option and worked great. There were birds all the way from the bottom to cloud base as I turned in 600 fpm. My drivers were cheering me on and told me I had just flown 188 km! Woohoo! But, why stop there? I was still climbing and the sky had dissolved all but two beautiful clouds just ahead. I left my bird thermal and topped out everything I could get before going on final glide into a blue sky. The tailwind returned and increased to 16mph and I could see I was covering miles very quickly. Best final glide I have ever had! Nearly five hours later I settled on a landing field 210 km away and had a beautiful landing. Wow, I did it. Gecko Girl did it! 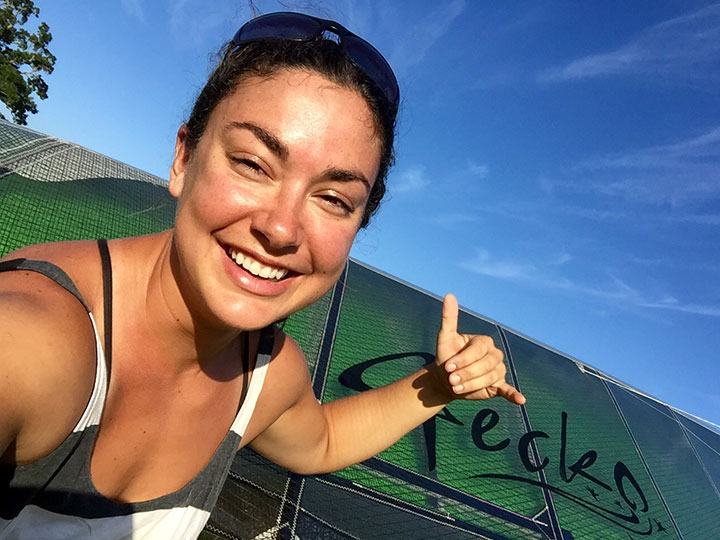 The Gecko continues to amaze me and the flying is always fun. I am very confident the Gecko can go even farther. If I could have launched earlier or had not been chased by sea breeze, I am sure the 244 km waypoint would have been behind me. I look forward to many flights and long miles on the Gecko. Thank you Moyes for a beautiful hang glider!